The competition moved from the Place du Marché (in full sun) to a more shady place which allowed the donkeys and horses not to suffer too much from the heat.

The breeding “Les baudets du Breuil” presented two female donkeys in the category: “female female donkey”, that is to say that the fedon (the little baby donkey) is presented at the same time as the mother, he follows her.

See you at the National Competition on July 31, 2022 at the Dampierre sur Boutonne asinerie. This competition is organized by the UPRa mulassière du Poitou (now the Association Nationale des Races Mulassières du Poitou). 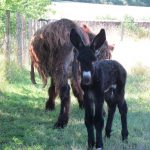 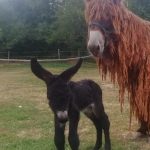