Kaporal , son of Freya and Eros du Genet (born and raise at the Breuil) took part in the “national mulassier competition” in Dampierre sur Boutonne.

Kaporal was raise in Breuil, with his mother until he was 7 month old.

In the 1-year-old male category, Kaporal du Breuil is champion of France.

This is the second time that a donkey born and raise at the Breuil to win this title. 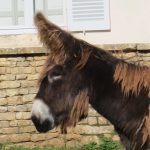 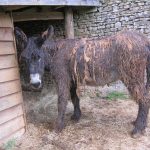 Egée du Breuil is back homeNews